Swap Santa’s sleigh for a van this Black Friday

Black Friday has become infamous across the globe as a day that some love and others loathe.

For those of you who don’t know exactly what Black Friday is, Black Friday takes place the day after the American holiday of Thanksgiving and marks a time of the year when shops slash their prices and revellers spend, spend, spend!

Many say that the term ‘Black Friday’ came about as a result of November signalling the month when shops begin to turn a profit, thus going from being ‘in the red’ to being ‘in the black’. Word has it that retailers began to mark Black Friday with deals and reductions as early as the year of 1932. In the USA the shopping day is so popular that many businesses and schools call the holiday ‘The Day After Thanksgiving’ and allow students and employees to take the day off. States including California, Florida and Kentucky as well as many others even provide all government employees with holiday.

It’s lucky that many are given the day off because whilst, in the past, shops would traditionally open earlier than usual at 6am, as retailers saw popularity grow opening times went out of the window. Now many open at midnight on Thanksgiving Day and carry on trading for 24 hours.

Whilst Black Friday has been incredibly popular in the states for many years, we hadn’t been as interested until very recently. In 2013 ASDA announced it would run “Walmart’s Black Friday by ASDA”, the first of its type in Britain. Whilst some critics initially slated the idea and claimed it was ‘too American’ to appeal to British shoppers, it has very quickly become one of the largest shopping days of our calendar too. Some claim that as much as £2bn is made in 24 hours online and in-store across our retailers.

Those wishing to make the most of the sales ahead of Christmas now know that the shops have the deals. So, once you have your haul how will you get it home? Our van rental options could be just what you’re looking for!

Around the festive season many of us are hoping for new items of furniture, washing machines and dishwashers and of course this year’s must have tech. Black Friday is bound to bring a host of great deals but once you have that bargain 65-inch TV in your grasp thoughts will quickly turn to getting it home safely.

We offer a Luton Transit van complete with a tai 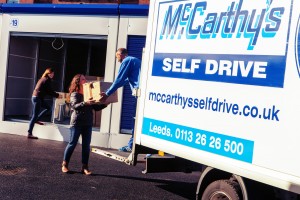 l lift to ensure that whatever it is you need to move you can do it with ease. Vehicles can be rented from both our Leeds and Harrogate branches and come complete with a run through of the van’s features.

You can rent the van for as little as just one day right up to a week if you have some serious shopping to do! You could even pretend to be Santa Claus and help family and friends to get their buys home. As long as you have no more than 6 points on your license and are over the age of 23 renting a van from us really couldn’t be easier.

If you need help lifting your items or would like a driver you can also contact us about our man with a van services. This option includes the assistance of one of our happy helpers as well as rental of the vehicle.

Now all there’s left to do is write your list and get queuing!