Self Storage Explained – how to use our Leeds, Wakefield and Harrogate sites

When you work with self storage every day, like we do, it seems such a simple idea, and you know how useful it can be in so many situations.

But we forget that, for many people, they’re not really sure what it’s all about or in what way it might work for them.

So, we asked three customers to tell us how they use our Leeds, Wakefield and Harrogate self storage sites to help demonstrate just a few of the many ways we can help!

Sarah, aged 45 from Garforth in Leeds, first rented a self storage unit with us four months ago at our Meanwood Road premises. She explains: “We’ve been wanting to move house for some time, and about 12 months ago we thought it was happening. Then, out of the blue, the sellers pulled out at the last minute. We lost the house we were buying as they needed to be out more quickly than we could find another buyer – it was heartbreaking! So, we decided we wanted to avoid being in a chain if at all possible, as it was too risky. 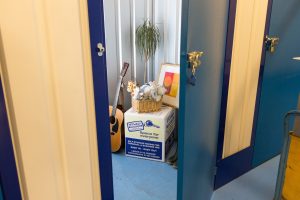 “We kept our house on the market, sold it about six months ago, and decided to move out into short term rented accommodation while we found a house we wanted to buy. We decided to rent a self storage unit at McCarthy’s in Leeds, and began moving some of our belongings into it, as the flat we are renting already has some furniture and is smaller than our house. We could do this really gradually over a few weeks, so it wasn’t at all stressful or overwhelming. Then when completion day came, we only had some big pieces of furniture which McCarthy’s loaded up into a crate on the removal van, sealed on site and then took it off to their secure container storage facilities until we need it. It was a very laid back moving day compared to ones we’ve had before!

“The self storage is great, as it feels really safe, and we can come and go as we please. Sometimes we’re there twice a week picking up bits and bobs or dropping off things we’ve bought for the new house. Sometimes we’re not there at all in a week. It’s so flexible and very convenient for us as we can pop in on our way home from work. Now I’m happy to say we’ve had an offer accepted on a new house, and we move in in a couple of weeks. But again, there’s no stress with removal day, as we can just move our stuff in gradually as needed – giving us time to do a few spots of decorating and cleaning!”

John, 56 from Knaresborough, began renting a storage unit five months ago, when he felt like his home was about to burst at the seams. “My mother in law sadly passed away a few months ago, and my wife and I were left everything. We went through the house and there were many items of sentimental and physical value which we wanted to keep to one side, but we just didn’t have the space at home,” he explains. “When we saw McCarthy’s self storage one day on our way through Harrogate we decided to investigate. We found ourselves renting a small unit that very day, and immediately starting moving things into it. It was great to be able to put them there, and know it was safe, whilst we had longer to consider what we wanted to keep, sell or donate.

“We then decided to keep the storage unit on for a bit longer while we had some house renovations done. It made it much easier not to have to be working around piled up furniture and belongings as we emptied the relevant rooms into the storage unit as we went along! Now the work has been done, we’re just thinking about what we may or may not want to return to the house – we’ve grown to quite like the more minimalist look!”

Setting up a business

Rachel, 38 from Horbury, set up her own online retail business in 2015. Last year she decided to take space at McCarthy’s Storage World in Wakefield. She needed room to expand as she tells us: 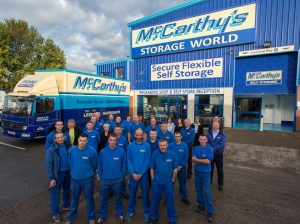 “I’d been operating from home for 12 months, running a business selling various decorative items and gift wares. But as the business grew, which was fantastic, as did the levels of stock I needed to hold. My spare room and garage could no longer cope and my husband was sick of tripping over stuff everywhere he went!

“Someone I know was a customer already and suggested McCarthy’s self storage. When I looked round I was impressed with the cleanliness and it felt safe and secure, and I knew I wouldn’t mind going there any time day or night on my own. I’ve already needed to scale up my storage unit in size, which was really simple to organise, and I can access wifi and electricity, so I can plug in my laptop and update stock and orders as I go along. I’ve discussed with them that I might need extra seasonal storage around Christmas, which they’ve said is no problem. I can’t imagine working anywhere else now!”

Feel inspired to find out more? Why not get in touch to see how we could help you create the extra space you need?