As the 1st August marks a celebration of all things Yorkshire we’ve decided to take a look back at the history of McCarthy’s and the links we have to ‘God’s Own County’.

When considering the land of the white rose thoughts may turn to the classic Yorkshire Tea, the North York Moors or a tasty Parkin cake. But from humble beginnings we’re proud to say that McCarthy’s is just as much a part of the region’s rich tapestry!

Our story began in 1968 when our founder Mick McCarthy launched the business and began to run the show from a terraced house in Lomond Place, Leeds – McCarthy’s Removals was born! Six months later the company moved to Newton House in Spencer Place. Incidentally this historic building was the last long distance lorry drivers’ hotel in the city of Leeds.

g the 1970’s the business grew from strength to strength, moving props and scenery for a variety of theatre companies both in Yorkshire and up and down the country, as well as helping homeowners move throughout the region, and beyond. As well as props, McCarthy’s also transported the now famous dolphins which have entertained for decades at the popular zoo and theme park, Flamingo Land, in North Yorkshire. It was quite a challenge!

During the 1980’s the business really began to make moves both figuratively and literally. The firm moved to its current and familiar Leeds location on Meanwood Road in order to make space for its growing fleet of vans and ever-increasing staff numbers.

Fast forward a decade to the 1990’s when McCarthy’s won the contract to look after Yorkshire Water, a business which provides vital resources across the whole county. 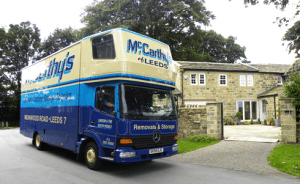 In 2005 our Leeds offering continued to grow as we opened the first McCarthy’s Storage World in the city. Five years later we spread further across Yorkshire and opened a new Storage World in the beautiful and historic town of Harrogate. Finally, in 2015 we were pleased to take a plot in Wakefield and offer further storage options in this part of the region.

So it really has been a Yorkshire success story through and through, beginning 48 years ago with a local Yorkshireman Mick who has now passed on the reigns to his son, Mike. We hope to carry on serving the people of our incredible county for many more years to come.

Celebrate this momentous day with us by using the hashtag #YorkshireDay across social media channels and telling us why you love Yorkshire!